So 13 kids aged twenty and younger decided that it was a great idea to street race on Highway 99 during broad daylight in their exotics. They would block multiple lanes, too, by driving slower so that they could get nice long stretches ahead of them to floor it. From personal experience, excellent highway choice. I’ve been tempted to treat stretches of Highway 99 (The Sea-to-Sky Highway, one of the most scenic in the world) like a racetrack, even in rental Jeeps. But, of course, speeding is dangerous and stupid, don’t do it.

The cars will all be impounded for 7 days and each driver fined $196. The thing is, there were no speeding tickets handed out, as only witnesses said the teens were “allegedly” doing in excess of 200 km/h, no cop ever saw them driving at excessive speeds/there’s no footage of it/evidence. After receiving calls, cops waited at off ramps, and when the cars exited, they were doing the speed limit and simply told the cops they were all going out for a meal. The $196 tickets almost don’t make sense, as they were tickets for “driving without reasonable consideration for others”. I mean, they could have killed the zero other people who were in front of them…since they didn’t let anyone pass the two back cars so that they could keep the road open to race on. Sounds pretty considerate actually..

A few of the cars had the “N” (Novice) sticker on them too (stupid B.C. law that you have to slap the ugly thing on your car until you have your full license). Reports are that 12 drivers were Asian males and 1 was female (you can see them in some of the pics). Only one of the car’s was registered to the driver, the rest were registered to parents. 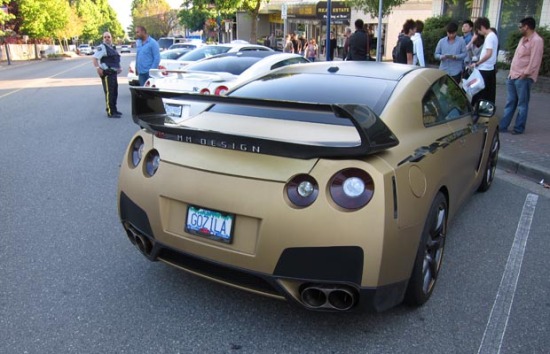 “I know there’s a lot of disappointment wondering why we only charged them with an offence of $196,” the officer said. “The fact of the matter is we have to look at all the evidence we have and what we’re able to prove.” Although the case is still active, police are currently relying on third-party evidence, which is not enough to charge the suspects with dangerous driving or seize their cars permanently. – The Province.